Selfless, honorable, loyal, focused, driven. These are a few words that describe Brett Puckett – Associate at Stan Johnson Company and Major in the United States Air National Guard. This fall, Brett will put his professional career temporarily on hold to begin a six-month deployment. We recognize the sacrifice he and his family are making, and we are honored that Brett took time to share his story with us.

At Stan Johnson Company, we are always looking for ways to celebrate our culture and our employees who embody it, and Brett Puckett is a shining example of what makes our company – and country – great!

“Brett is a leader, humble, and easy to shepherd. You know how to give support to those who lead you and you know how to lead those who follow you. I am grateful for you as a man, husband, father, and friend.”
Pastor Snook, First Baptist Church of Glen Este

Can you describe your military career? What about your pending deployment is most exciting?

I enlisted in the active duty Air Force in 2001 and transferred to the Air National Guard in 2005. In 2010, I commissioned as an officer and was just promoted to Major this year. My entire military career has been spent in meteorology, and I’ll be focused on that discipline during my deployment. I’m very excited to have the chance to serve our great country, and even though that may sound cliché, that’s what is instilled in us and what we train for. I think of a minor league baseball player getting called to the big leagues and getting a chance to contribute to something bigger. In this case, I hope my big league stay is brief, but I will enjoy the impact I’ll have on the mission.

“I’m lucky. My dad is the best role model any guy could ever have.”
Nolan Puckett (son)

What concerns do you have about being away from your family?

It’s tough to say exactly how my deployment will impact my family, but my wife is a champ! She’s one of the strongest people I’ve ever known. I’m sure there will be some trying times at home while I’m gone, but I have to lean on the hope that the last 16 years of parenting will give my children enough momentum to thrive while I’m away. 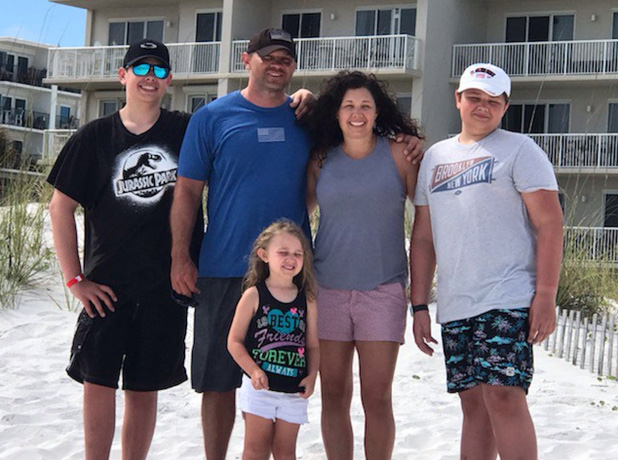 “Brett was an athlete – very disciplined. He has disseminated that trait through to his jobs and his military service, his family, and most importantly to his faith. He inspires. He is dedicated. He is analytical.”
Cindy Foreman (aunt)

How easy is it to balance your military career with your professional career? You’ve been with Stan Johnson Company for almost one year and have built a lot of momentum. Will that be difficult to step away from?

Balancing my military career with my real estate career has not been a problem. I’ve had many years of experience balancing two careers, and I look at myself as “always on” with both. It’s common for me to take and make phone calls related to business while I’m wearing the uniform, and I’m blessed that the nature of my military career has allowed that. During my deployment though, I hope the impact to my professional career is minimal. There will definitely be the lost time of having conversations that build relationships that lead to winning business, but I’m confident that my team will carry the torch while I’m gone, and that I’ll be motivated to hit the ground running upon my return.

“I was immediately impressed with Brett’s ability to communicate and his innate intelligence. He knew what I needed, and he was able to simply and straightforwardly advise. When we needed something, he fixed it. I’m not sure if it was his honesty, his integrity, or his patriotism, but something made me trust him and we have kept in touch. Rarely do you find someone that begins as a simple business relationship and grows into something more.”
Michael Paolucci (client and friend)

Have you had a mentor in your professional career?

Yes, my long-time friend, Ryan Roedersheimer, is also my colleague and mentor. When he moved out of technology sales and into commercial real estate, I listen to him rave about how fulfilling the industry was, and I could see through his excitement that this was the industry for me. Ryan has given so freely of his time and knowledge, and I know there’s no way I would have gotten the jump start on this new endeavor the way I did without him.

“Brett is one of my closest friends, and I am grateful for our friendship. Since we met in 2004, I have always admired you as a man. Your humility, faith, leadership as a husband and father, and your work ethic have driven me to be better in each of these areas.”
Ryan Roedersheimer (friend and colleague)

Is Ryan the reason you joined Stan Johnson Company?

The short answer is yes, but it’s deeper than that. I ultimately joined the company because I witnessed all the wonderful characteristics that Ryan saw and connected with when he decided to join, and the firm’s culture is at the top of that list. It’s been said time and time again that the culture is one area that sets the firm apart. Investors rave about the reputation of Stan Johnson Company, which offers instant credibility and demands the highest level of integrity on our part to maintain that. After months of talking to so many people across the firm, I’ve noticed something unique about our brokers. It’s difficult to pinpoint exactly what it is, but there seems to be a higher degree of professionalism and humility that I’ve seen with every internal interaction. I’ve had several collaborative experiences with brokers across the firm and every one of them was handled in a positive and professional way. Ryan, throughout our relationship, has said “a rising tide lifts all boats,” and the culture at Stan Johnson Company reflects that.

“Brett is one of the most loyal, focused, driven people I know. I would have no doubts if I ever needed Brett for anything that he’d be by my side. There's a very small group of people I'd call my close friends, who I can depend on, would love to be around anytime, and Brett is one of those people. He also has one the driest senses of humor and has us rolling with his weird sense of humor. There aren’t many better people than Brett Puckett.”
Jason Little (friend)

What advice would you share with someone just starting their career?