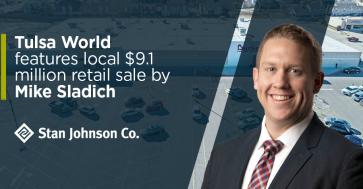 News & Insights
Retail Center in South Tulsa Sells for $9.1 Million, Broker Says
Originally published by Tulsa World A retail center in south Tulsa has been purchased for $9.1 million, according to the locally based commercial real estate company that helped broker the sale. The Burlington-anchored center is located at 7020-7030 S. Memorial Drive, spans more than 102,000 square feet across two buildings and includes an out parcel occupied by men’s clothing retailer DXL. The property is located just west of Woodland Hills Mall, the city’s largest shopping mall. Stan Johnson Co.’s Mike Sladich, Jeff Hughes, Maggie Holmes and Michael Watson exclusively represented the seller, a Baltimore-based investor. A private 1031 exchange buyer from San Jose, California, was the buyer. A 1031 exchange allows an investor to sell one or more appreciated assets and defer the payment of capital gain taxes by acquiring one or more replacement properties. “This asset had some obstacles to overcome in the sales process, namely the oversized box for the main tenant, Burlington,” Sladich, regional director and partner in Stan Johnson Co.’s Atlanta office, said in a statement. “Burlington has communicated their intent to decrease their average store size and operate in the 25,000-30,000-square-foot range moving forward. “Because this site featured a larger floor plate commitment of 55,000 square feet, there was little to no interest from institutional investors that typically would have jumped to acquire an asset like this. However, this opened the door for private investors to purchase a well-located, multi-tenant center in the heart of south Tulsa’s retail corridor, and we were able to secure a California exchange buyer who saw the intrinsic value of the shopping center.” 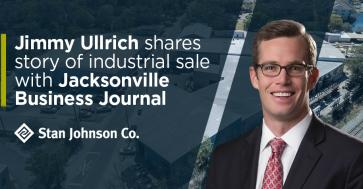 News & Insights
California Investor Buys Industrial Property Near Jaxport for More Than $5 Million
Originally published by Jacksonville Business Journal An industrial property in one of Jacksonville’s tightest submarkets recently sold for more than $5 million. The property at 3440 Evergreen Ave., which consists of two buildings built in 1945, sold for $5.3 million. Jimmy Ulrich and Michael J. Macchia of Stan Johnson Co. brokered the transaction. The seller was a local private investor, and the buyer was an individual investor named Sunday Xu from Los Angeles, according to information from Stan Johnson Co. “This sale was more than a sale – it was the culmination of a multi-generational family ownership of the property, first as the owner-user, and later as the owner-investor,” said Ullrich. “In an interesting turn of events, the winning bidder was a California investor who is an owner-user turned national real estate investor, so Mr. Xu was able to understand and work through some of the nuances of a 70-year-old family-owned property.” The property consists of 115,500 total square feet and is fully leased to KME America Marine &amp; Tube Fitting. It is located close to Jaxport, in an area that has a vacancy rate of less than 3%. KME contracts with the U.S. Navy, and it fabricates copper alloy pipes for shipping and offshore. “Selling KME was a pleasure,” Ullrich said. “The property offered a great combination of lease term, market and property type. Therefore, we experienced a feeding frenzy of buyer activity. We received more than a dozen bids and six of them were at full asking price.” The deal is one more example of the First Coast's attractive industrial submarket of commercial real estate, which has seen numerous investment sales this year as well as new developments to try and meet a high demand for industrial space. 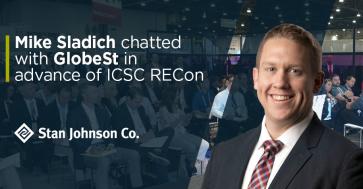